The artist was also a prolific printmaker.

Below a montage of works by Julius Bissier:

Julius Bissier passed away in 1965.

Works by Julius Bissier can be found in the permanent collection of the Museum of Modern Art located in New York City.

Julius Bissier was an accomplished abstract painter. In his early work he was a painter of impressionistic still life works. His later more abstract work still includes the shapes of vases and vessels. These vessels are painted with a feeling of movement. Bissier reminds me of the painter Giorgio Morandi.

From a design aspect the artist did great job at not crowding the picture space. Each shape seems to have its own identity and space to move. The artist also did a great job at creating a variety of shapes including squiggles like Cy Twombly and text.

Albert Ernest (Beanie) Backus was a painter renown for his images of the Florida coastline. Beanie Backus was born in the year 1906. Backus often used the palette knife to apply thick impasto paint.

The artist did take summer courses at Parson’s School of Design in New York City. For the most part he was self taught as a painter.

Backus was a mentor and teacher to many of the Florida Highwaymen Painters. As African-American painters galleries wouldn’t show their work. The group contained around 26 members and traveled up and down the Florida coast painting landscapes and selling them on the spot for $25 to $50.

Below a montage of works by Beanie Backus:

The artist worked in oils for the most part. When he was first starting his career he also used watercolor.

Beanie Backus had a great talent for painting the Florida coast. I enjoy his thick and heavy strokes of paint often used in trees. The artist also created wonderful combinations of blue waters of the sea with warm sunset colors.

He was not only a great artist, but just as important, Backus was a great mentor. He was the major professor to the Florida Highwaymen.

Peter Beard, the photographer who became renown for his imagery of Africa, has been found dead after a multi week search.

The artist was living in Long Island, New York. The authorities had been looking for the artist for 19 days.

Beard was born in New York City in 1938. He often used his art to bring media attention and to raise money for many animal rights and anti-poaching campaigns.

Whilst living in Africa Beard spotted the woman who would become a world renown supermodel, Iman. The wife of rocker David Bowie.

In this clip some great works and brief interview with Peter Beard:

Rock Therrien is a contemporary painter from Canada. Rock Therrien was born in Armagh, Quebec, Canada in the year 1970.

The artist is now based out of Montreal, Canada.

Below a great montage of works by Rock Therrien:

Rock Therrien’s work has so many interesting qualities. I love the way he uses text, especially in works with neon. His work that involves well known cartoon figures flipping somebody off or swearing are hilarious! 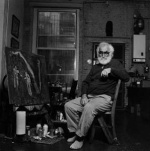 Resnick emigrated to the United States with his family when he was five years old. The family settled in Brooklyn, New York.

Resnick took classes at the Pratt Institute when he was 14. He would go on to study at the American Artist’s School in New York City.

The artist was drafted into the Army for the World War 2.

After finishing his service duties Resnick attended the school of Hans Hoffman.

The artist worked with oils, acrylics, and gouache.

Below we catch up with the great James Kalm to view an exhibition featuring Milton Resnick:

Milton Resnick passed away in 2004.

Works by the artist can be found in the permanent collections of the Museum of Modern Art and the Whitney Museum in New York City.

Milton Resnick was a fantastic painter. My favorite things about his paintings were the muted colors and soft edges. He also created exciting surface textures.

The artist was awarded photographer of the year by the Japan Photo Critics Association.

Narahara served as a professor at the Kyushu Sangyo University.

Ikko Narahara passed away in January of 2020.

Works by the artist can be found in the permanent collection of the Museum of Modern Art located in New York City.

Ikko Narahara was a fantastic photographer. The artist did a great job of creating interesting compositions that often include a main shape, such as a heart, birds, or a human head, that is repeated. His work had a great narrative quality.

Eikoh Hosoe is a contemporary Japanese photographer. Hosoe is renown for his black and white images of multiple bodies pressed together. Hosue is also a filmmaker.

Eikoh Hosoe was born in Yonezawa, Yamagata, Japan the year 1933.

Below a montage of works by Eikoh Hosoe:

The artist graduated from the Tokyo College of Photography.

Hosoe has won several award including the Education Minister’s Award for Fine Arts and the Fuji film photographer of the year.

In this clip a brief interview with the artist:

The artist has served as the director of the Kiyosato Museum of Photographic Arts since it opened its doors in 1995.

Hosoe is based out of Tokyo, Japan.

Works by the artist can be found in the permanent collections of the Victoria and Albert Museum in London and the Museum of Modern Art located in New York City.

The work of Hosoe reminds me of Ruth Bernhard. Bernhard was among the first to photograph an interracial lesbian couple.

Bruce Robbins is a contemporary abstract painter and sculptor from the United States. Bruce Robbins was born in Philadelphia, Pennsylvania in the year 1948.

Robbins earned a degree from the Cooper Union School of Art in New York City.

The artist has worked with many mediums including cardboard, encaustic, and wood. When he paints he works with oils, watercolors, and gouache.

When he works as a sculptor he creates what he calls Reconstructions. These works are a mixture of painting and sculpture.

Bruce Robbins has developed a still that reminds me of Piet Mondrian with some added triangle shapes. His work reminds me of being in a public bar seeing martini glasses sitting on tables.

Hogue attended the Minneapolis College of Art and Design for one year before landing an illustration job with the newspaper The Dallas Morning News.

Price range information: Prints range from $2,000 to $10,000. When he used color he preferred to paint with watercolor.

Unlike many artists of his generation Hogue was never employed by the Works Progress Administration or Federal Arts Project.

The artist served a professor at the Texas State College for Women.

In this clip many works by the artist:

The artist’s mother taught him about Mother Earth as a youngster. Mother Earth was a favorite subject matter for the artist.

Works by the artist can be found in the collections of the Dallas Art Museum.

Alexandre Hogue was a fantastic artist with excellent composition and drawing skills. His landscapes remind me of the great Thomas Hart Benton. Both Hogue and Benton did a great job of creating various textures and patterns in trees, soil, and skies.

The duo combine art and journalistic photography to make statements about the world, society, and politics.

In this clip we view an exhibition of work by the duo:

Below a great interview with the team:

The team has served as guest lecturers at the University of Arts located in London.

Adam Broomberg and Oliver Chanarin create works that seem to combine traditional and modern photography. On line the works seem to have a layered and collage appearance.

The work of the Broomberg and Chanarin team remind of contemporary photographer Matthew Brandt. Brandt often seems to create collages and blend multiple images together.