Philip and Kelvin LaVerne were a father and son duo renown for their creative furniture designs. The team made functional furniture pieces that were also great displays of artistic genius. The family created bronzes tables and cabinets.

The LaVern’s used a centuries old techniques to give each set a unique and one of a kind feeling. Large slabs of pewter and bronze were often set in a special soil for periods of 6 weeks to allow them to oxidate.

The duo often used imagery from the Chinese culture.

In this clip a close up of an end table. What a remarkable finish it has!:

Below a close look at an Asian theme coffee table ready to hit the auction block:

Philip LaVerne was born in 1907 and passed away in 1987. Kelvin LaVerne was born in 1937 and is still living.  This father and son team produced tables of the highest quality, great structure and with unique imagery. The process of placing the slabs of pewter or bronze in soil allowed each piece to be very unique.

Patricia Urquiola is a contemporary architect and interior designer. Patricia Urquiola was born in Oviedo, Spain in the year 1961. Urquiola’s design style is very hot on the furniture market for her tables and chairs.

Urquiola attended the Polytechnic University of Milan where she studied architecture. After college she went on to open a studio in Milan in 2001.

The artist strives to make all of her pieces include four items: innovation, emotion, rigor, and mental comfort.

One of the most successful artists in the world when it comes to doing industrial design Urquiola has worked with many internationally renown companies including BMW, Louis Vitton, Moroso, and the Ritz Carlton Marriott.

Below a brief interview with Patricia Urquiola:

Urquiola has a work titled the fjord armchair which is part of the permanent collection of the Museum of Modern Art located in New York City.

Its great to see art in contemporary furniture design. As it seems people are living in smaller living spaces new designs for furniture that is slightly smaller than our grandparent’s style of tables but with more color is in heavy demand.

My favorite artist when it comes to chair design is the great Ron Arad. Below a link to my article on this great designer: 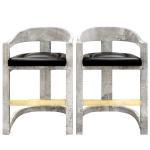 Karl Springer was an American designer of furniture. Spring was renown for his not only his sleek line work, but for often using animal skin in the design. The skin was lacquered to protect the skin from damage. Springer’s furniture was in high demand from celebrities including European royalty.

Karl Springer was born in Berlin, Germany in the year 1930.

Originally Springer wanted to become a bookbinder. This job taught him about using animal skins and creating fantastic designs.

Below a rare table made out of granite created by Springer:

Karl Springer flourished during the 1960’s, 70’s, and 80’s. He began his own workshop in 1960. In 1965 the Duchess of Windsor bought a table and his career as an internationally collected furniture designer began.

In this clip we view a table and chair created by the artist. The chair shown was created using shagreen which is the skin of a shark found in Asia:

Springer was influenced by classical Chinese and Art Deco style of design.

Karl Springer had a great eye for creating interesting curvy shapes, even circles and semi-circles, in his shapes. Not only did this break the norm of block shapes, he further pushed the design envelope by using the animal skins. What a great idea! 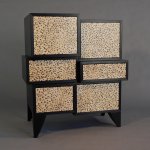 Kevin Irvin is an internationally renown furniture designer renown creating tables and cabinets. Irvin attended the University of Southern Indiana where he earned a bachelor of science degree. Irvin went on to earn a M.F.A. from Arizona State University.

Irvin is based out of Phoenix, Arizona.

In this clip Irvin talks about creating work for a slowing economy:

Irvin’s work can be found at the Scottsdale Museum of Contemporary Art.

The artist also creates Christmas ornaments and storage boxes. The storage boxes often have an eye catching geometric design. These works remind me of the boxes of the First Nations of Canada.

Kevin Irvin’s furniture is a great mixture of art and functionality. Another artist who did this is the great contemporary artist Pedro Friedeberg who creates tables and chairs that are incorporate the human hand.

Irvin’s work is a great example of contemporary furniture design. The basic rectangle shape, a shape that was often a large rectangle with basic wood or faux wood design, is now transformed into many boxes each with an interesting abstract pattern of shapes.

Ramon Orlina is a contemporary glass master sculptor and architect. Ramon Orlina was born in the Philippines in the year 1944. Orlina produces table top sculptures, murals, and tables.

Orlina earned a bachelor of science degree in the field of architecture from the University of Santo Tomas. This Catholic university is located in Manila.

Orlina has also created works in public spaces in the countries of Singapore and Hong Kong.

In addition to glass Orlina works with steel and concrete.

The artist has won two prestigious awards from Biennial events in the countries of Japan and Spain.

Below we visit the house of the artist and see many of his works:

The artist is based out of Manila,Philippines.

What an incredible master of medium. Its great that he shows such wide variety of styles in his work from abstract to his work that concentrates on the curves of the female form.

Mollino began working in the field of architecture in 1930.

The artist enjoyed exploring mountains. Mollino was an avid skier.

Carlo Mollino passed away in 1973.

Mollino was known for playing the eccentric artist similar to Salvador Dali, Dali had the most artistic house ever! One of Mollino’s most famous quotes was “Everything is permissible so long as it’s fantastic!”